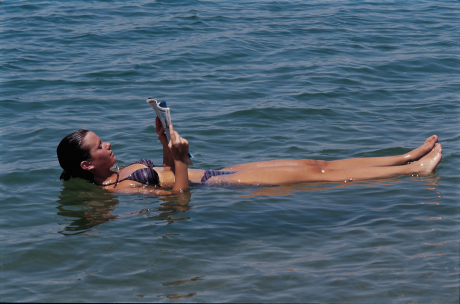 [T]he Jordan Rift Valley is a beautiful and dramatic landscape, which at the Dead Sea, is over 400m (1,312 ft.) below sea level, making it the lowest point on earth. The Dead Sea is flanked by mountains to the east and the rolling hills of Jerusalem to the west, giving it an almost other-worldly beauty. Although sparsely populated and much of it is serenely quiet now, the area is believed to have been home to five Biblical cities: Sodom, Gomorrah, Adman, Zebouin and Zoar (Bela).

[T]his vast stretch of water receives a number of incoming rivers and once the waters reach the Dead Sea they are land-locked and have nowhere to go. They evaporate and leave behind the warm, soothing, super salty water which is ten times saltier than sea water and is rich in chloride salts of magnesium, sodium, potassium, bromine and several others. This cocktail of minerals and salts is used to supply industry, agriculture and medicine with some of its finest products.

[T]he Jordanian east coast of the Dead Sea has become an important centre of both religious and health tourism in the region. Good roads and luxury hotels with spas and fitness centres, as well as historical sites make this region as enticing to today’s international visitors as it was to kings, emperors, traders, prophets and pilgrims in antiquity. Some of Jordan’s very best conference and meeting facilities are at the Dead Sea, including the King Hussein Bin Talal Convention Centre, making it an ideal location to combine business with that all-important time to relax and rejuvenate.