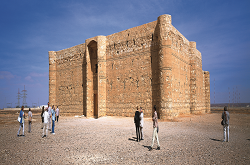 [F]or a relatively small country, Jordan has a rich seam of treasures, with sites of important historic interest spread throughout the country. If you follow in the footsteps of the Roman Emperor Hadrian, the Prophet Moses or Lawrence of Arabia, you will unearth some of Jordan’s most prized sites at Jerash, Mount Nebo and Wadi Rum respectively. Unlike these three major figures from history, Indiana Jones may be just a Hollywood creation, but if you follow in his footsteps, you will find the greatest treasure of all, the rose-red city of Petra. Unique is an overused word, but it can certainly be applied to so many sites in Jordan.